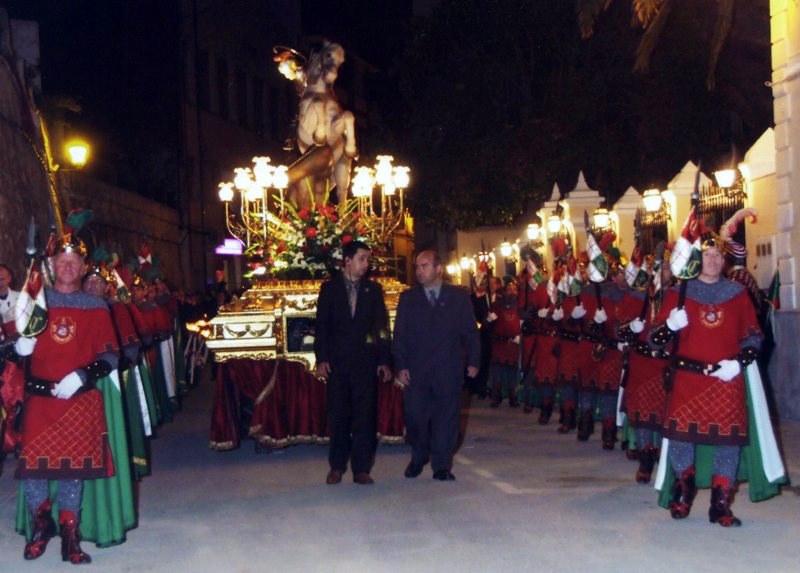 Although the times indicated are usual, are only indicative.

19:30 hours: Moving the image of St. George from his chapel in the parish church of Santa Maria

9:30 hours: Mass for the dead in the cemetery of our village

Years Easter coincides with the data of traditional holiday celebration, These dates are changed.

L’any 1964 began processions called "Transfer of St. George». Went out the first day procession 21 d'abril, them 20:30 hours, from the door of the Chapel, through the square and into the church by the side door of St. George Street. The day 3 May, completed octave saint, took the same route, but in reverse.

In 1980, the large number of faithful attending, he changed the route of the processions of St. George Shuttle as follows: Chapel of the Communion, main square, Street Angel Nougat, Carrer Sant Jaume, Calle Felipe IV, Main street, square and main entrance of the Church. The return of the transfer was done in reverse. This tour was recovered, almost, the itinerary until the Civil War was the procession the day of St. George and the tradition that "St George always go looking castle".

Also the procession back Transfer, rather than take the day 3 May, at the end of the last octave, began to make their work further on this day, provided they were not Saturday or Sunday 3 May, to facilitate its devotees attending the same.

From 5 May 1990, the reconstruction of the chapel dedicated to St., small image of St. George dominates the same. And with the new location of the image small, the route of the processions of the Shuttle were added St. George Street. Since then, does the shuttle from the chapel to the church and, the return, church to the chapel.

The offering of flowers to St. George

This event is celebrated 22 April before the Angelus Prayer. Was incorporated into our festivals initiative row of Maseros. In this event, it is mainly the children’s members of the ranks who parade with the official costume carrying bouquets of flowers that they deposit in the Altar of Sant Jordi. However, little by little, are increasingly also the largest, SUIT wearing the official participating in this event and offer flowers to the Holy.

later, to mark the 25th anniversary of the Offering, opened the possibility to participate also in the people who desitjarta. However, in recognition of the row Maseros, Esto parade in last place, Offering closing the Municipal Corporation.

Once the festival of Sant Jordi 1964, became the first octave solemn celebration in his honor. Each day is dedicated to a row, starting with the Christians and the Moors alternating, and the celebration was done before the altar of St., because they were devotees front image pattern; and currently using the image of St. George (the small) presides over the altar during the holidays, Masses are held octave front of the altar.
When he founded the line of Caliphs 1977 it went from octave to Novena, adding an extra day because all had their day filaes.

The 1980 was founded row Jordians and decided then to recover the traditional octave. Canviantse structure, and every day was dedicated to two filaes, one of each side, and the last three days in the local music organizations, of dead people and dead intention of the Brotherhood.

The Days of Music octave of St. George is the oldest celebrated throughout the Valencian Community uninterruptedly.

L’any 1978 Brotherhood of St. George gets the cultural events were held once again concluded acts of parties; in a 1980 adopt the current structure concerts.

In the first editions the concerts took place after each of the Masses octave, but with time have reduced the number of concerts which are matched to the days of the weekend, usually Sunday.