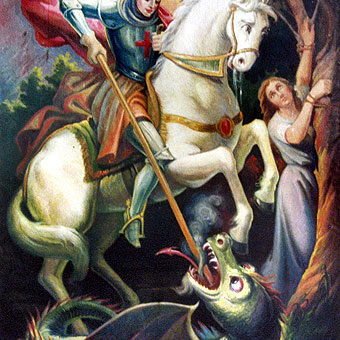 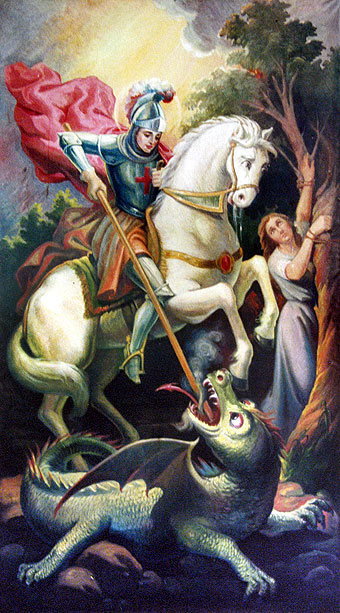 Saint George [Diospolim, 270 (aprox.) – Lydia, 303] was a Roman soldier and Christian martyr. Although the life of the saint is full of legendary elements, known to his tomb Lydia (Palestine) was very popular since ancient times and before the twelfth century because their religion was spread by East and West. Like this, its popularity has led him to be one of the most revered saints of Christianity.

The life of the saint have it completely certain historical data, only references in many books, such as palimpsest Acta Sanctorum (fifth century), el Georgslied (ninth century) or writings Iacopo da Varazze (The Golden Legend, XIII century).

It seems that his father was Geronci, Official Roman Cappadocia aimed at Dióspolis (Palestine), where he married a local girl, called Policromia, and had a son: W. (George).

Upon reaching the age of majority, George enlisted in the Roman army, following in the footsteps of his father. When he was thirty years, Nicomedes destined as officer and formed part of the personal guard of the Roman Emperor Diocletian.

The Emperor Diocletian was characterized for being openly hostile to Christians, to the point of ordering the year 303 a great persecution against the followers of Jesus Christ, but Jordi, obviously, refuses to act because he was a Christian.

Diocletian ordered the torture he considered a traitor. The chained to a wheel of swords and, finally, decapitate the van Lydia (now Lod, Israel).

The body of the martyr was transferred to George Dióspolis. Above the tomb, I made a few years after Constantine built a church in his honor.

The Pope Gelasius I was canonized in 494.