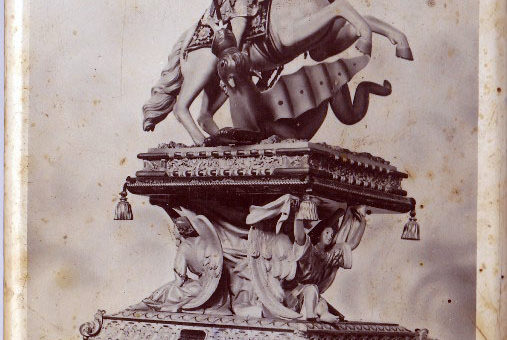 stamping 1943 the old image of St. George burned during the Civil War 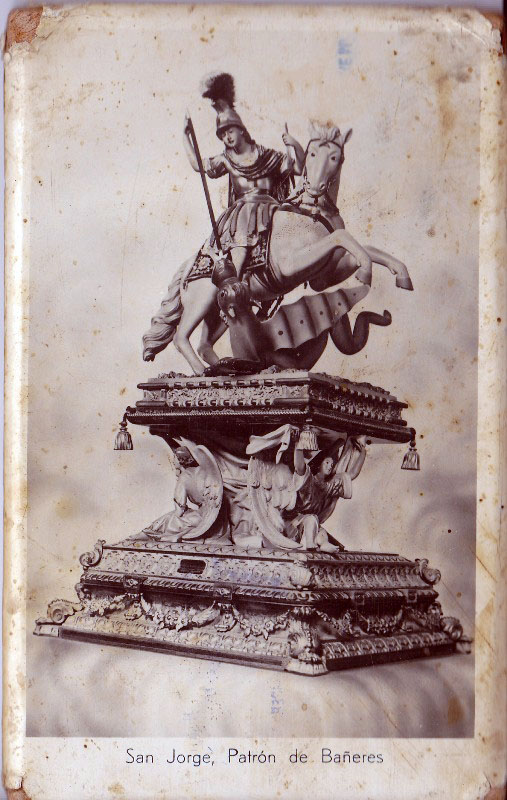 «(…) D. Jaime the Conqueror, man of love for his country and his religion that one knows inspire these feelings nobilísmimos, genius warrior, figure that stands out above all in the history of the Middle Ages, He fulfilled the mission that God entrusted him to clean Moorish kingdoms of Aragon and Valencia and populate Christians for peace they had so long wanted and could make demonstrations of their faith. As the lords who had possessed material resources and many vassals fit for war they lent their assistance, King duty was worthily repay you putting profits reported in possession of the peoples conquered step by step, and can be sure that not insubordinarían against his authority as faithful servants who excited to contribute to the Reconquista good phones that King. When this already possessed the kingdom peacefully, feudal lords became places of Bigneres (and it was then Bañeres) and Serrella Jofre de Loaysa and his wife Jaimeta, in Calatayud privilege given to 13 October 1254, which, so they would have entered the village, would offer crowns, no false gods as did the Romans, but the true God, would replace the Cross of Christ Crescent and invoke and proclaim pattern and defender of religious and social interests to St. George the Martyr, which they professed tender devotion from time immemorial Aragon and Catalonia and the armies of D. Jaime that were composed also of Aragon and the King himself in all battles experienced protection Santo and some saw him appeared encouraging his followers because he asked for his help with faith and trust (…)».