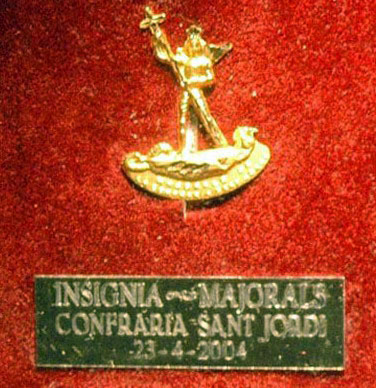 The Mayorales of the Guild of St. George identified Badge Mayoral St. George.

The Mayoral known to bring Badge demands always available if you ever need the advice beast, support and collaboration. Each badge each Majora saved all the dreams and illusions, all the work, the joys and sufferings of time that each holds a unique experience Mayorales, never experienced before with its Board. Guard your heart and dedication of the period during which responsibility has been the head against the Brotherhood of St. George. A time of grace in which convictions have lived most intensely faith and values ​​and experiences and sensations, never lost while they live.

So the standard is not only a sign of representation. Mayorales also reminded that must always renew their knowledge available to the service of the Brotherhood of St. George, strengthening even more the love and devotion they profess our Patron Saint George.

The 23 in April 2004 it was imposed to all the Presidents who had been it of the Brotherhood the insignia that accredited to them in its position. And the widows of Miguel Vicedo Sanjuán and Juan Sempere Blanes were given them as a sign of remembrance and homage..

From this date, the 23 d'abril, and every time a President concludes his mandate, he imposes Mayoral insignia of the Brotherhood of St. George, certifies that in his new responsibility and commitment.

Badge Mayoral only be used by those who have been Presidents of the Guild of St. George, and only in the acts in which they participate as Majorals.