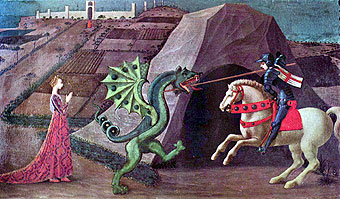 The story by which the saint is known around the world is for the death he caused the dragon who intended to eat a beautiful maiden.. This narrative was written by Iacopo da Varazze in the twelfth century in his work “The Golden Legend”. It soon spread throughout Europe to the whole of the Crown of Aragon.

Legend has it that St. George was a Roman soldier born in the Middle East and is the great protagonist of a great chivalrous feat set in Libya..

They say that a fierce and terrible dragon was ravaging the surroundings of the village, who possessed the faculties of walking, fly and swim, and he had a stinking breath, to the point that from a great distance with his breath he poisoned the air, and it caused the death of all who breathed it. It was the ravages of the flocks and the people, and the deepest terror reigned in all that region. The inhabitants thought that if they gave him every day a person to serve him as a prey, it would not wreak havoc right and left. In fact, the legend says, that the system worked out for them, but what was really complicated, it was to find a person who every day let himself be eaten by that monster. So the whole neighborhood decided, to make a draw every day among all the inhabitants of the village and that the one who destined the luck would be given to the beast.

This was done for a long time and the monster must have been satisfied with it, as he stopped doing the havoc and mischief he had done before. But… come here that one day, luck wanted the king's daughter to be the one destined. The princess was young, bella, before… there were citizens who offered to replace her, but the king was stern and inexorable, and with a heart full of mourning, she said she was both her daughter and that of any of her subjects and agreed that she should be sacrificed. The maiden left the city and she went alone to the lake where the beast lived, while the whole neighborhood, heartbroken and afflicted, he watched from the wall as he went to the sacrifice.

But it was the case that a young gentleman was introduced to him, riding a white horse, and with armor all gilded and shining. The maiden, all worried, he told her to run away quickly, because there was a monster around there that would eat it as soon as you saw it. The gentleman told him not to be afraid, that nothing had to happen to him, neither to him nor to her, since he had come expressly to fight the beast and thus free himself from the sacrifice of the princess, as well as in his village. Will, he came out suddenly with great horror from the maiden and with great joy from the knight. This, with a good spear blow he wounded him. The knight tied the monster by the neck and gave it to the maiden so that she could take it to the village herself.. The legend even explains, that the inhabitants of the village had seen all that feat from the wall and that he received with open arms the maiden and the knight. In the main square of the village, the villagers finished finishing that fierce animal.

It is said that the king wanted to marry his daughter to St. George, but that he replied that he did not deserve it and that his visit to that village was because he had had a divine revelation about the urgent need to save that village from the monster.. He recommended to the king and his vassals that they be good Christians and that they honor and venerate God as he deserved..