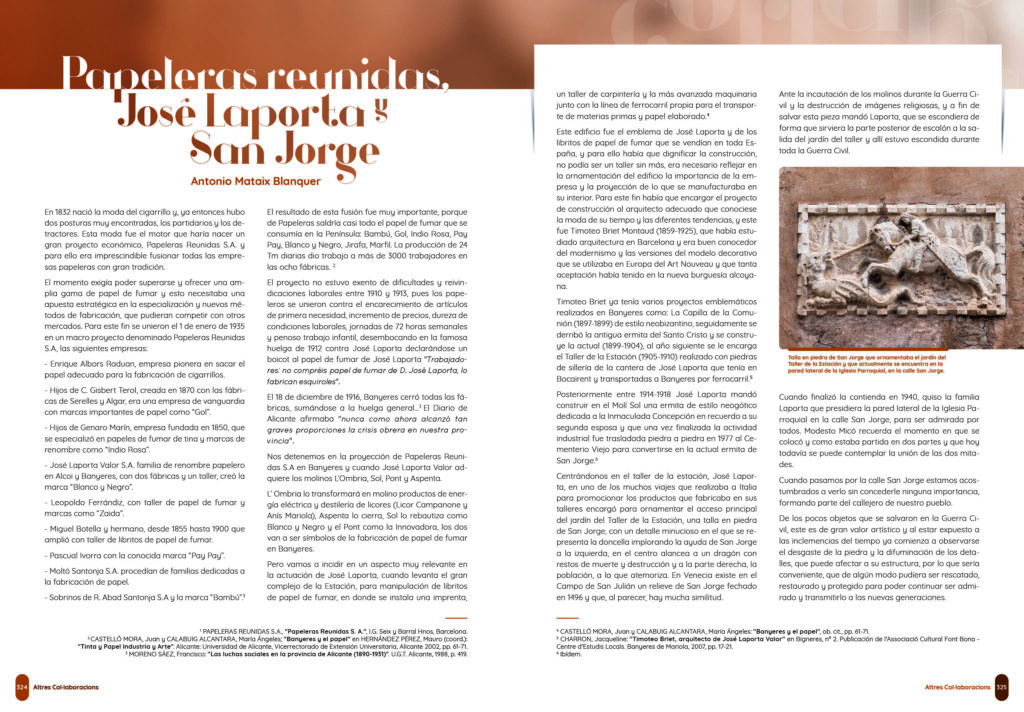 In 1832 the cigarette craze was born and, already then there were two very conflicting positions, supporters and naysayers. This fashion was the engine that would give birth to a great economic project, Papeleras Reunidas S.A. and for this it was essential to merge all the paper companies with great tradition.

The moment demanded to be able to surpass itself and offer a wide range of cigarette paper and this required a strategic commitment to specialization and new manufacturing methods., that could compete with other markets. For this purpose the 1 of January of 1935 in a macro project called Papeleras Reunidas S.A, the following companies:

– Enrique Albors Raduan, pioneer company in taking out the right paper for the manufacture of cigarettes.

– Children of C. Gisbert Terol, created in 1870 with the Serelles and Algar factories, It was an avant-garde company with important paper brands such as "Gol".

– Children of Genaro Marín, company founded in 1850, who specialized in tub rolling papers and renowned brands such as "Indio Rosa".

– José Laporta Valor S.A.. renowned papermaker family in Alcoi and Banyeres, with two factories and a workshop, created the brand "Black and White".

– Leopoldo Ferrándiz, with a cigarette paper workshop and brands such as "Zaida".

– Miguel Botella and brother, since 1855 until 1900 which he expanded with a cigarette paper booklets workshop.

– Moltó Santonja S.A.. they came from families dedicated to the manufacture of paper.

The result of this merger was very important, because almost all the cigarette paper that was consumed in the Peninsula would come out of Trash: Bamboo, Goal, Indian Rose, Pay Pay, Black and white, Giraffe, Ivory. The production of 24 Tm per day employed more than 3000 workers in the eight factories. 2

The project was not exempt from difficulties and labor demands among 1910 Y 1913, because the stationers united against the rising cost of basic necessities, price increase, harsh working conditions, days of 72 hours per week and painful child labor, leading to the famous strike of 1912 against José Laporta declaring a boycott of José Laporta's cigarette paper “Workers: do not buy smoking paper from D. Jose Laporta, it is made by scabs”.

The 18 from December to 1916, Banyeres closed all factories, joining the general strike…3 The Diario de Alicante stated “Never before has the workers crisis in our province reached such serious proportions”.

We stop at the projection of Papeleras Reunidas S.A in Banyeres and when José Laporta Valor acquires the L’Ombria mills, Sol, Pont y Aspenta.

L ’Ombria will transform it into a mill for electrical energy products and a liquor distillery (Campanone Liqueur and Mariola Anise), Aspenta closes it, Sol renames it Black and White and El Pont as the Innovator, the two are going to be symbols of the manufacture of cigarette paper in Banyeres.

But we are going to influence a very relevant aspect in the performance of José Laporta, when he lifts the great complex of the Station, for handling cigarette paper booklets, where a printing press is installed, a carpentry workshop and the most advanced machinery together with its own railway line for the transport of raw materials and processed paper.

This building was the emblem of José Laporta and the cigarette paper books that were sold throughout Spain, and for this it was necessary to dignify the construction, it couldn't just be a workshop, It was necessary to reflect in the ornamentation of the building the importance of the company and the projection of what was manufactured inside. For this purpose, the construction project had to be commissioned to the appropriate architect who knew the fashion of his time and the different trends., and this was timothy briet montaud (1859-1925), who had studied architecture in Barcelona and was a good connoisseur of modernism and the versions of the decorative model used in Europe of Art Nouveau and that had had so much acceptance in the new Alcoy bourgeoisie.

Timoteo Briet already had several emblematic projects carried out in Banyeres such as: The Chapel of Communion (1897-1899) Neo-Byzantine style, then the old hermitage of Santo Cristo was demolished and the current one is built (1899-1904), the following year the Station Workshop is commissioned (1905-1910) made with ashlar stones from the José Laporta quarry in Bocairent and transported to Banyeres by rail.5

Later between 1914-1918 José Laporta ordered the construction of a neo-Gothic hermitage in Molí Sol dedicated to the Immaculate Conception in memory of his second wife and that once the industrial activity was finished it was moved stone by stone in 1977 to the Old Cemetery to become the current hermitage of San Jorge.6

Focusing on the station workshop, Jose Laporta, In one of the many trips he made to Italy to promote the products he manufactured in his workshops, he commissioned to decorate the main access to the garden of the Station Workshop, a stone carving of Saint George, with minute detail depicting the maiden imploring the help of Saint George on the left, in the center he spears a dragon with remains of death and destruction and on the right, the population, the one who scares. In Venice there is in the Campo de San Julián a relief of Saint George dated in 1496 So what, apparently, there is a lot of similarity.

Before the seizure of the mills during the Civil War and the destruction of religious images, and in order to save this piece Laporta sent, that it was hidden in such a way that the back part of the step at the exit of the workshop garden would serve and it was hidden there throughout the Civil War.

When the contest ended in 1940, wanted the Laporta family to preside over the side wall of the Parish Church on San Jorge street, to be admired by all. Modesto Micó remembers the moment when it was placed and how it was divided into two parts and that today you can still see the union of the two halves.

When we pass through San Jorge street we are used to seeing it without giving it any importance, forming part of the street map of our town.

Of the few objects that were saved in the Civil War, This is of great artistic value and being exposed to inclement weather, the wear of the stone and the blurring of the details are already beginning to be observed., that can affect its structure, so it would be convenient, that somehow could be rescued, restored and protected so that it can continue to be admired and passed on to new generations.