The roots, our hallmarks – Party Program 2020 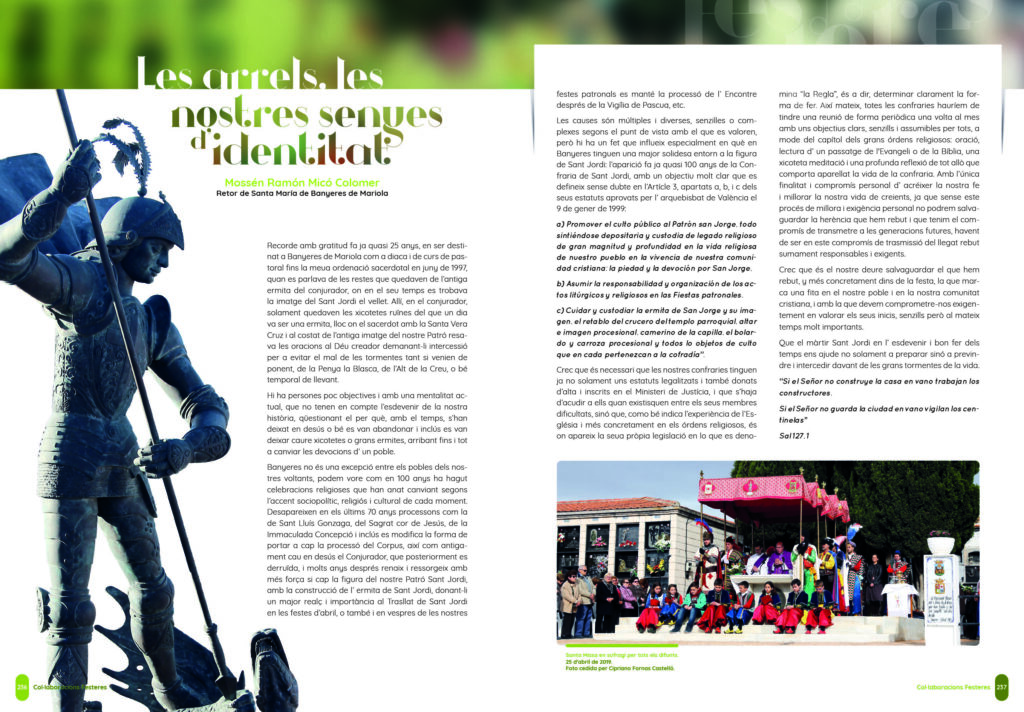 The roots, our hallmarks – Party Program 2020

I remember with gratitude almost now 25 years, being assigned to Banyeres de Mariola as a deacon and pastoral course until my ordination to the priesthood in June 1997, when there was talk of the remains of the old hermitage of the conjurer, where in his time was the image of St. George the Elder. There, in the conjurer, only the small ruins of what was once a hermitage remained, place where the priest with the Holy Cross and next to the ancient image of our Patron prayed prayers to the creator God asking for intercession to avoid the evil of storms whether they came from the west, of the Peña la Blasca, of the High Cross, or temporary east.

There are people who are not very objective and have a current mentality, which do not take into account the unfolding of our history, questioning why, with the time, they have fallen into disuse or been abandoned and even small or large hermitages have been dropped, even changing the devotions of a people.

Banyeres is no exception among the surrounding villages, we can see how in 100 For years, there have been religious celebrations that have changed according to the socio-political accent, religious and cultural of each moment. They disappear in the latter 70 years processions like that of St. Louis Gonzaga, of the Sacred Heart of Jesus, of the Immaculate Conception and even changes the way the Corpus Christi procession is carried out, just as in the past the Conjurer falls into disuse, which is subsequently demolished, and many years later it is reborn and resurfaces more strongly if it fits the figure of our Patron Saint George, with the construction of the hermitage of Sant Jordi, giving greater emphasis and importance to the Transfer of St. George in the April festivities, or also and on the eve of our patron saint’s festivities the procession of the Encounter continues after the Easter Vigil, etc.

The causes are many and varied, simple or complex depending on the point of view with which they are valued, but there is a fact that especially influences Banyeres to have a greater solidity around the figure of Sant Jordi: the appearance is almost over 100 years of the Brotherhood of St. George, with a very clear goal that is undoubtedly defined in the Article 3, sections a, b, and c of its statutes approved by the Archbishopric of Valencia on 9 January 1999:

a) Promote public worship of the Patron Saint George, all feeling depositary and custodian of a religious legacy of great magnitude and depth in the religious life of our people in the experience of our Christian community: piety and devotion to Saint George,

b) Assume responsibility and organization of liturgical and religious acts in the patron saint festivities.

c) Caring for and guarding the hermitage of San Jorge and its image, the altarpiece of the transept of the parish temple, altar and processional image, chapel dressing room, the bollard and processional float and all the objects of worship that in each belong to the brotherhood ".

I believe that it is necessary for our brotherhoods to have not only legalized statutes and also to be registered and registered with the Ministry of Justice., and that they should be approached when difficulties exist among their members, but, as well indicated by the experience of the Church and more specifically in religious orders, is where its own legislation appears in what is called "the Rule", in other words that is, clearly determine how to do it. Likewise, all brotherhoods should have a regular meeting once a month with clear goals, simple and affordable for all, as a chapter of the great religious orders: prayer, reading a passage from the Gospel or the Bible, a little meditation and a deep reflection on everything that comes with the life of the brotherhood. With the sole purpose and personal commitment to increase our faith and improve our lives as believers, for without this process of personal improvement and exigency we will not be able to safeguard the heritage we have received and which we are committed to passing on to future generations., having to be in this commitment of transmission of the legacy received extremely responsible and demanding.

I think it is our duty to safeguard what we have received, and more specifically within the party, which marks a milestone in our people and in our Christian community, and with which we must commit ourselves diligently in valuing its beginnings, simple but at the same time very important.

May the martyr Saint George in the future and good deeds of the times help us not only to prepare but to prevent and intercede in the face of the great storms of life..

If the Lord does not build the house in vain the builders work.