The Legend of Saint George, Princess and the Dragon – Party Program 2020 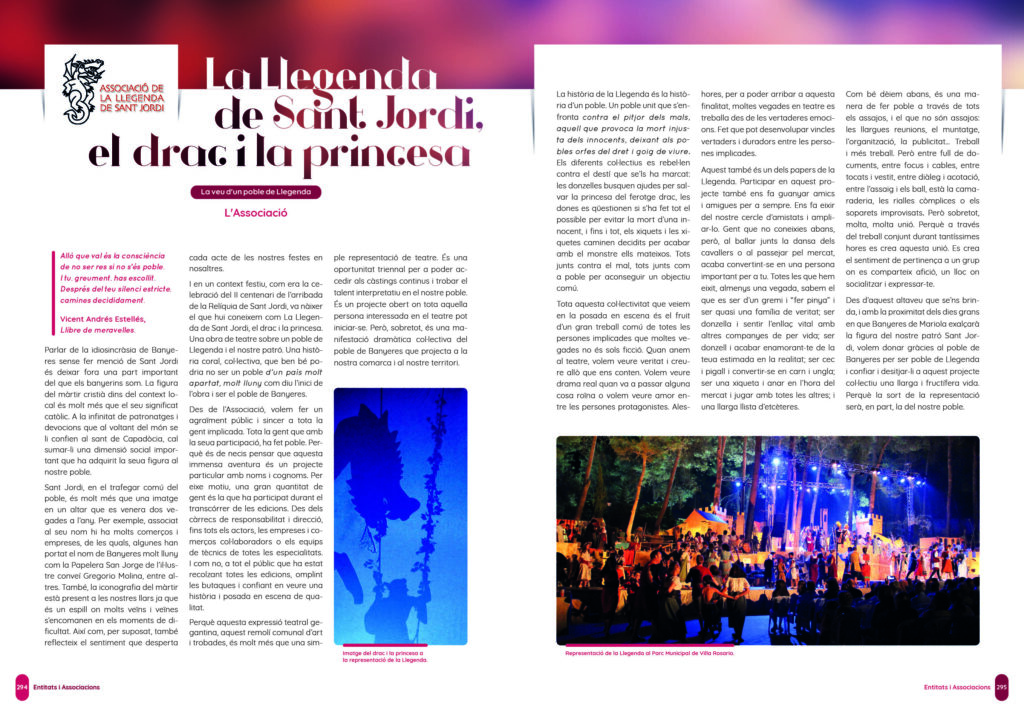 The Legend of Saint George, Princess and the Dragon – Party Program 2020

The voice of a people of legend
The Association

What matters is the awareness of being nothing if you are not a people. And you, seriously, you have chosen. After your strict silence, you walk decidedly. Vicent Andrés Estellés, Book of wonders.

Talking about the idiosyncrasy of Banyeres without mentioning Sant Jordi is to leave out an important part of what we Banyers are. The figure of the Christian martyr within the local context is much more than its Catholic meaning. To the infinity of patronages and devotions that around the world are entrusted to the saint of Cappadocia, We must add an important social dimension that has acquired its figure in our people.

Saint George, in the common traffic of the village, it’s so much more than an image on an altar that is worshiped twice a year. For example, associated with its name are many shops and businesses, of which, some have taken the name of Banyeres as far away as the Papelera San Jorge de l’il·conveí luster Gregorio Molina, among others. too, the iconography of the martyr is present in our homes as it is a mirror where many neighbors entrust themselves in times of difficulty. As well as, of course, it also reflects the feeling that every act of our festivities arouses in us.

And in a festive context, as was the celebration of the second centenary of the arrival of the Relic of St. George, what we know today as The Legend of Saint George was born, Princess and the Dragon. A play about a town of Legend and our patron saint. A choral story, col·school, which may well not be a village from a very remote country, very far as the beginning of the work says and to be the town of Banyeres.

From the Association, we want to make a public and sincere thanks to all the people involved. All the people who with their participation, has made people. Because it is foolish to think that this immense adventure is a particular project with names and surnames. For that reason, a large number of people have participated during the course of the editions. From the positions of responsibility and direction, to all actors, companies and trades col·laboratories or teams of technicians of all specialties. And of course, to all the public who have been supporting all editions, filling the seats and confident in seeing a quality story and staging.

Because this gigantic theatrical expression, this communal whirlwind of art and encounters, it is much more than a simple theatrical performance. It is a three-year opportunity to be able to access the continuous castings and find the interpretive talent in our town. It is an open project where anyone interested in theater can get started. But, above all, is a dramatic manifestation col·school of the town of Banyeres that projects in our region and in our territory.

The story of the legend is the story of a people. A united people facing each other against the worst of evils, one who causes the unjust death of the innocent, leaving peoples orphaned of the right and joy of living. The different col·students are rebellious·against the destiny that has been set for them: the maidens seek help to save the princess from the fierce dragon, women question whether every effort has been made to prevent the death of an innocent woman, even, the boys and girls walk determined to finish off the monster themselves. All together against evil, all together as a people to achieve a common goal.

All this col·the legitimacy we see in the staging is the result of a great common work of all the people involved which is often not just fiction. When we go to the theater, we want to see truth and believe what they tell us. We want to see real drama when something bad is going to happen or we want to see love between the protagonists. Then, to be able to reach this purpose, many times in theater one works from the real emotions. That fact can develop true and lasting bonds between the people involved.

This is also one of the roles of the Legend. Participating in this project also makes us win friends forever. It makes us step out of our circle of friends and expand it. People you didn't know before, But, by dancing the dance of the knights together or by strolling through the market, he ends up becoming an important person to you. All of us have come out, at least once, we know what it’s like to be a guild and “make pineapple” and be almost a real family; being a maiden and feeling the vital bond with other lifelong companions; be a maiden and end up falling in love with your beloved in reality; be blind and clumsy and become flesh and nails; be a girl and go to market time and play with everyone else; and a long list of others.

As we said before, it is a way of making people through all the rehearsals, and what are not essays: the long meetings, the assembly, the organization, advertising… Work and more work. But between sheet of documents, between spotlights and cables, between headdresses and dress, between dialogue and demarcation, between rehearsal and dance, there is camaraderie, complicit laughs or impromptu dinners. But above all, a lot, a lot of union. Because through the joint work for so many hours this union is created. It creates the feeling of belonging to a group where hobby is shared, a place to socialize and express yourself.

From this speaker provided to us, and with the proximity of the big days in which Banyeres de Mariola will exalt the figure of our patron Saint George, we want to thank the town of Banyeres for being a town of Legend and trust and wish this project col·school a long and fruitful life. Because the luck of the performance will be, in part, that of our people.