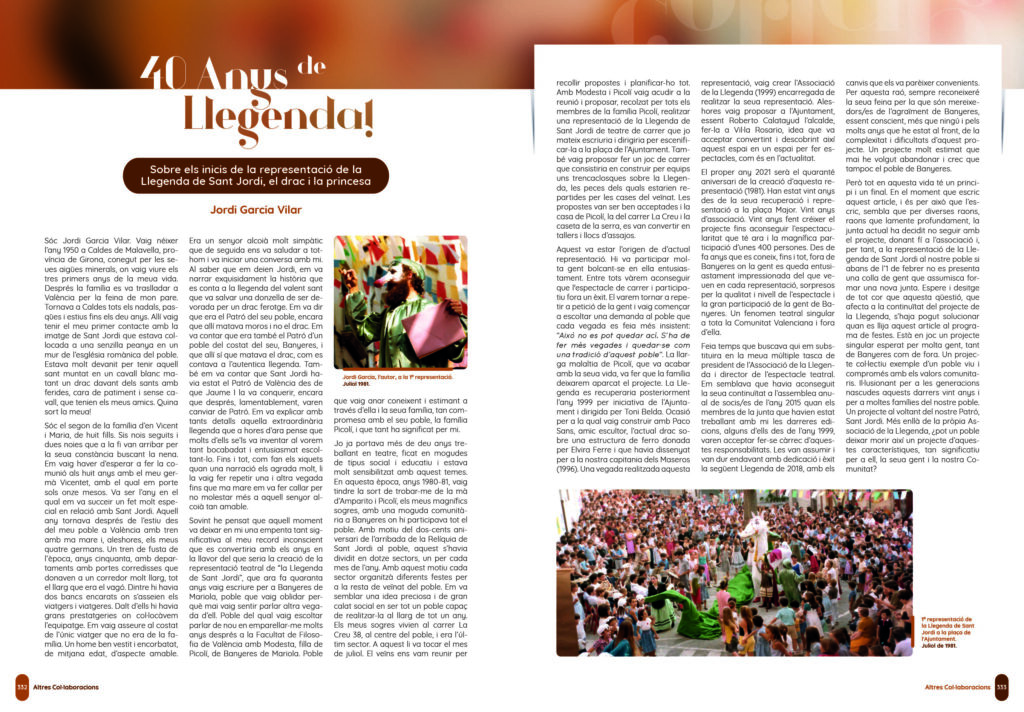 On the beginnings of the representation of the Legend of Sant Jordi, Princess and the Dragon
Jordi Garcia Vilar

I'm Jordi Garcia Vilar. I was born in 1950 in Caldes de Malavella, province of Girona, known for its mineral waters, where I lived the first three years of my life. Then the family moved to Valencia for my father's job. He returned to Caldes every Christmas, Easter and summer until the age of ten. There I had my first contact with the image of St. George that was col·located on a simple pedestal in a wall of the Romanesque church of the village. He was very smart to have that saint mounted on a white horse killing a dragon in front of the wounded saints, face of suffering and without a horse, that my friends had. How lucky I am!

I'm the second in Vicent and Maria's family, of eight children. Six boys in a row and two girls who finally arrived for their perseverance looking for the girl. I had to wait to have communion at the age of eight with my brother Vicentet, with which it takes me only eleven months. It was the year in which a very special event happened to me in relation to St. George. That year I returned after the summer from my village to Valencia by train with my mother and, then, my four brothers. A wooden train of the time, fifties, with apartments with sliding doors leading to a very long corridor, the whole length of the wagon. Inside were two benches facing the passengers. Above them were large shelves where cabbage·we rented our luggage. I sat next to the only non-family traveler. A well-dressed and hunched man, middle-aged, kind-looking. He was a very nice gentleman from Alcoy who immediately greeted us all and started a conversation with me.. Knowing they called me Jordi, he told me exquisitely the story told in the legend of the brave saint who saved a maiden from being devoured by a fierce dragon. He told me that he was the Patron of his people, although there he killed Moors and not the dragon. He told me that he was also the Patron of a village next to his, bathtubs, and that there he did kill the dragon, as told in the true legend. She also told me that Saint George had been the Patron of Valencia since James I conquered it, although later, unfortunately, they changed Patron. He told me in so much detail that extraordinary legend that at this time I think that many of them were invented on the verge so dumbfounded and excited to hear it. Even, as children do when they really like a story, I made her repeat it over and over until my mother kept me quiet so as not to bother that kind gentleman from Alcoy..

I have often thought that that moment left such a significant boost in my unconscious memory that over the years it would become the seed of what would be the creation of the theatrical performance of "the Legend of St. George.", which I wrote forty years ago for Banyeres de Mariola, people I forgot because I never heard of him again. A town I heard about again when I paired up many years later at the Faculty of Philosophy in Valencia with Modesta, daughter of Picolí, de Mariola. People I met and loved through her and her family, so committed to his people, the Picolí family, and that has meant so much to me.

I had been working in theater for over ten years, involved in social and educational movements and was very aware of this issue. In this age, years 1980-81, I was lucky enough to find myself in the hands of Amparito and Picolí, my magnificent in-laws, with a community movement in Banyeres where the whole town participated. On the occasion of the two hundredth anniversary of the arrival of the Relic of St. George in the village, it had been divided into twelve sectors, one for each month of the year. For this reason each sector organized different parties for the rest of the village. It seemed to me a beautiful idea and of great social depth as it is a whole town capable of realizing it throughout a whole year.. My in-laws lived on La Creu Street 38, in the center of the village, and was the last sector. This was the month of July. Neighbors gathered to pick up proposals and plan it all out. With Modesta and Picolí I went to the meeting and proposed, supported by all members of the Picolí family, to perform a performance of the Legend of Sant Jordi in street theater that I myself would write and direct to stage it in the Town Hall Square. I also proposed to make a street game that would consist of building a puzzle about the Legend by teams, the pieces of which would be distributed among the houses of the neighborhood. The proposals were well received and Picolí's house, the one in La Creu street and the mountain house, they became workshops and rehearsal sites.

This was the origin of the current representation. Many people took part in it, enthusiastically turning to it. Together we made the street and participatory show a success. We repeated it at the request of the people and I began to hear a demand in the village that became more and more insistent.: "It simply came to our notice then. It has to be done more often and remains a tradition of this people. ". Picolí's long illness, which ended his life, made the family leave the project parked. The legend would be recovered later in the year 1999 on the initiative of the City Council and directed by Toni Belda. Opportunity for which I built with Paco Sans, sculptor friend, the current dragon on an iron structure donated by Elvira Ferre and designed for our captaincy of the Maseros (1996). Once this representation is made, I created the Legend Association (1999) in charge of making its representation. Then I proposed to the City Council, Roberto Calatayud being the mayor, do it in Vil·the rosary, idea that he accepted by turning and thus discovering this space into a space for making shows, as it is today.

Next year 2021 will be the fortieth anniversary of the creation of this representation (1981). It has been twenty years since its recovery and representation in the Plaza Mayor. Twenty years of association. Twenty years of growing the project to the spectacle it has now and the magnificent participation of some 400 people. It has been known for years, even, outside Banyeres where people are enthusiastically impressed by what they see in each performance, surprised by the quality and level of the show and the great participation of the people of Banyeres. A unique theatrical phenomenon in the whole of the Valencian Community and beyond.

For a long time I was looking for someone to replace me in my many jobs as president of the Legend Association and director of the theatrical show.. It seemed to me that he had achieved his continuity at the annual meeting of members of the year 2015 when board members who had been working with me the last few issues, some of them from the year 1999, agreed to take on these responsibilities. They took them on and carried on with dedication and success the following Legend of 2018, with the changes that seemed convenient to them. For this reason, I will always acknowledge their work for which they deserve the gratitude of Banyeres, being aware, more than anyone and for the many years I have been at the front, of the complexity and difficulties of this project. A much-loved project that I have never wanted to abandon and I think not the town of Banyeres.

But everything in this life has a beginning and an end. At the time of writing this article, and that’s why I write it, it seems that for several reasons, reasons he deeply regrets, the current board has decided not to proceed with the project, ending the association and, so, to the representation of the Legend of Sant Jordi in our town if before February 1 a group of people does not appear to assume to form a new board. I sincerely hope and wish this question, which affects the continuity of the Legend project, could be fixed when this article is delivered to the party program. At stake is a unique project awaited by many people, both from Banyeres and from outside. A project col·example of a people living and committed to community values. The·exciting for the generations born in the last twenty years and for many families in our town. A project around our Patron, Saint George. Beyond the Legend Association itself, Can a people let such a project die?, so significant to him, its people and our Community?