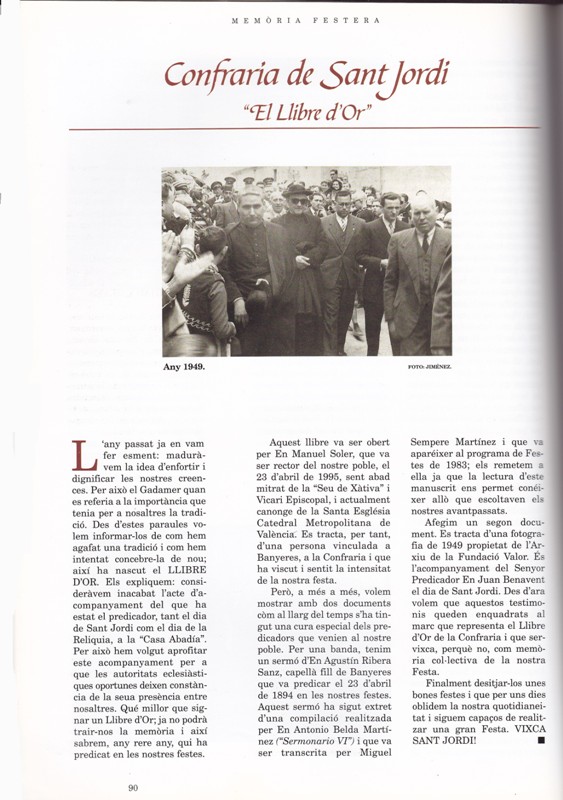 Last year we mentioned in: maduràvem the idea of ​​strengthening and dignifying our beliefs. This is why Gadamer when referring to the importance for us was the tradition. From these words we want to inform them of how we conceive tried it again; thus was born the Golden Book. told: we thought unfinished act of support than has been the preacher, So on the day of St. George as Relic, the "Abbey House". So we wanted to take this support for the appropriate ecclesiastical authorities are proof of his presence among us. What better sign a Golden Book; can no longer betray us memory so we know, any rere any, who preached in our celebrations.

This book was opened by Manuel Soler, who was rector of our people, the 23 d'April 1995, Abbot Mitra being the "Headquarters of Xativa" and Episcopal Vicar, and now Canon of the Metropolitan Cathedral of Valencia Holy Church. It, so, a person linked to Bathtubs, the Brotherhood and has lived and felt the strength of our party.

But, moreover, we want to show two documents how over time has taken special care of preachers who came to our town. Firstly, In a sermon we Agustín Ribera Sanz, son of the priest who preached Baths 23 d'April 1894 in our celebrations. This sermon was taken from a compilation made by Antonio Belda Martinez ("Sermonaries VI") and was transcribed by Miguel Martínez Sempere and it appeared the program of festivities 1983; refer to it as the reading of this manuscript allows us to know what they listened to our ancestors.

Adding a second document. This is a photograph of 1949 property Archive Foundation Value. És l’acompanyament del Senyor Predicador En Juan Benavent el dia de Sant Jordi. From now on we want these witnesses are fitted to the frame that represents the Golden Book of the Brotherhood and servixca, why not, • bargaining and collective memory of our Party.

Finally wish you a Merry Christmas and a few days to forget our daily lives and are able to make a great party. VIXCA SANT JORDI!